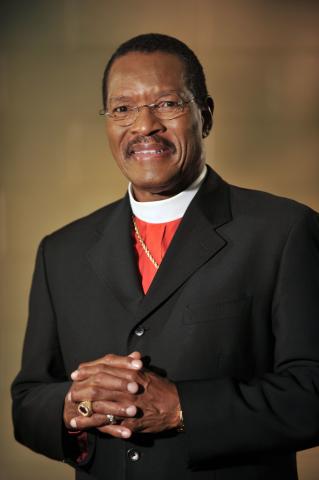 Bishop Charles E. Blake, Sr. was elected Presiding Bishop, the seventh in succession, by the General Assembly of the Church of God in Christ, Incorporated, on November 12, 2007, at the 101st Holy Convocation, during the quadrennial election. Bishop Blake was re-elected as Presiding Bishop in 2012, and again on Tuesday, November 15, 2016, following the COGIC 109th Holy Convocation. Bishop Blake retired after serving his 3rd four-year term as Presiding Bishop. Bishop Blake is the pastor of West Angeles Church of God in Christ, one of the largest churches in the Western United States, with a membership of over 25,000. He is recognized as one of the great preachers of this generation with a message that ministers to the whole person and brings together people of various racial and ethnic backgrounds.

On April 6, 2009, in Washington, D.C., President Barack Obama sought Presiding Bishop Charles E. Blake to serve on his 25-person White House Advisory Council on Faith-Based and Neighborhood Partnerships. This one-year appointment is a testament to his passion for the community and his desire to unite all people for the common good. He was also chosen as one of four individuals to speak at the Democratic National Convention’s first Ecumenical Service, where he pronounced his status as pro-life Democrat and challenged both Democrats and Republicans to protect the rights of the unborn and born alike.

The heart of Bishop Blake is seen quite clearly in the love that he has for the children in Africa who have become orphans because of the HIV/AIDS pandemic plaguing the continent. In response to the HIV/AIDS crisis in Africa, Bishop Blake founded, and was president of the Pan African Children’s Fund (PACF). Save Africa’s Children, a program of PACF, provided support to over 420 orphan care programs, 200,000 children and 24 nations throughout sub-Saharan Africa.

Bishop Blake’s awards and accolades are numerous. A few include the Distinguished Leadership Award presented by the African Presidential Archives and Research Center at Boston University (2007), the Trumpet Award (2006), the Salvation Army’s William Booth Award, the Greenlining Institute’s Big Heart Award, and was the designated recipient of the Los Angeles Urban League’s Whitney M. Young Award (2000). In 2003, Bishop Blake was awarded the Harvard Foundation Humanitarian Medal for his work with Save Africa’s Children and its mission to support orphanages throughout the continent of Africa. The Los Angeles County Board of Supervisors designated February 5, 2004 as Bishop Charles E. Blake Day.

Second only to his call as a minister of the Gospel, Bishop Blake says his most treasured accomplishments are those of a devoted husband to Lady Mae Lawrence Blake, and a loving father and grandfather to their three children and eight grandchildren.