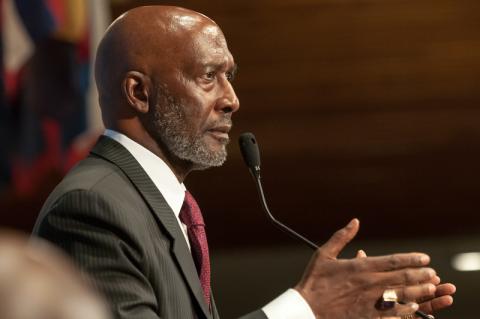 Bishop John Richard Bryant is the son of the late Bishop Harrison James Bryant and Edith Holland Bryant. He was born and raised in Baltimore, Maryland and is a graduate of Baltimore City College High School and is a graduate of Morgan State University in his hometown. After college, Bishop Bryant joined the Peace Corps and served as a volunteer in West Africa from 1965 to 1967. He has taken seriously the words "study to show thyself approved…" Bishop Bryant received his B.A. in 1965 from Morgan State University, Master of Theology in 1970 from the Boston University School of Theology and a Doctor of Ministry degree in 1975 from the Colgate Rochester Divinity School. He also received several Honorary Doctoral Degrees from Wilberforce University, Paul Quinn College, Payne Theological Seminary, the Southern California School of Ministry, Virginia Seminary and his alma mater, Morgan State University. In addition, he was honored as an outstanding alumni of Boston University School of Theology and was inducted into the Baltimore City College High School Hall of Fame. Bishop Bryant was a Martin Luther King, Jr. Fellow and while pursuing his doctoral studies at Colgate Rochester Divinity School, he completed special studies at the University of Lagos [Nigeria] and the University of Ghana at Legon and served as a Peace Corp volunteer. "The spirit of the Lord is upon me…" is reflected in the witness of John Richard Bryant. He has pastored three churches, Bethel A.M.E. Church, Fall River, MA; St. Paul A.M.E. Church, Cambridge, MA; and Bethel A.M.E. Church, Baltimore, MD. Under his pastoral ministry, 103 men and women have entered the Christian Ministry. With an emphasis on church growth, community development and political empowerment, he has preached and/or taught on more than 35 college campuses and across five continents. Bishop Bryant has served on several denominational, academic, community, ecumenical boards and was the recipient of many awards. In 1988, John Richard Bryant was elected and consecrated the 106th Bishop of the African Methodist Episcopal Church at the General Conference in Fort Worth, Texas. He was assigned to serve in the 14th Episcopal District (West Africa) where he presided over 101 churches and 25 schools. During his administration, he expanded the A.M.E. Church to include the first Francophone, the Ivory Coast. While in West Africa, he was given the additional assignment of the 10th Episcopal District (Texas) in January 1991.

At the 1992 General Conference he was officially assigned to the 10th Episcopal District, where he presided over 300 churches and served as the Chairman of the Board of Paul Quinn College. Under his leadership, this historically Black institution moved from probationary status to full accreditation and successfully raised $29 million dollars for the Capital Fund Drive. In July 2000, the Episcopal Committee of the 46th General Conference assigned Bishop Bryant to the 5th Episcopal District, where he presided over the A.M.E. churches in 14 states west of the Mississippi. Under his episcopacy, the 5th District partnered with businesses and banking institutions that resulted in the purchase of new homes by the members of the district valued at more than $100 million dollars. In addition, Bishop Bryant’s economic development initiatives resulted in several creative ventures, which included the construction of a new hotel in the St. Louis, MO area. In 2008, at the 48th Quadrennial Session of the General Conference, Bishop Bryant became the Senior Bishop of the African Methodist Episcopal Church and presided over the 4th Episcopal District which included seven (7) mid-western states, Canada and the AME India Annual Conference where the Lord allowed him and his wife, Reverend Cecelia Bryant, to officially bring the India Conference into the African Methodist Episcopal Church. At present, there are one hundred and sixty (160) churches in the AME India Annual Conference. Bishop Bryant is the recipient of many honors and awards including Ebony Magazines’ Honor Roll of Outstanding African-American Preachers and was recognized on their list of the 100 Most Influential Black Americans. He has published a collection of sermons entitled, "God Can: Sermons of Encouragement from the Life of Elijah." He and his wife, The Rev. Dr. Cecelia Williams Bryant are both the authors of "Healing For Wounded Vows." Bishop Bryant has been a faithful servant of the Lord Jesus Christ. He preached the gospel for over 55 years and in July 2016 at the Historic 50th Session of the General Conference of the African Methodist Episcopal Church, Bishop Bryants’ request for retirement from the episcopacy of his beloved church was granted. Even though retired from active administrative duties he is still serving the Lord with gladness. Bishop Bryant is currently on staff at Payne Theological Seminary as a Mentor for the Doctor of Ministry Degree Program and he continues to preach the length and breathe of this nation. He loves to proclaim the Good News of our Lord and Savior Jesus Christ and to compel men and women to acknowledge Jesus Christ as their personal Savior. Bishop John and Rev. Dr. Cecelia Williams Bryant are the parents of The Rev. Dr. Jamal Harrison Bryant and The Rev. Dr. Thema Simone Bryant Davis and both are proud grandparents