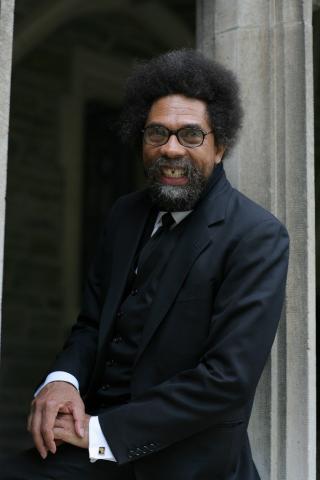 He made his film debut in the Matrix—and was the commentator (with Ken Wilbur) on the official trilogy released in 2004. He also has appeared in over 25 documentaries and films including Examined Life, Call + Response, Sidewalk, and Stand.

Last, he has made three spoken word albums including Never Forget, collaborating with Prince, Jill Scott, Andre 3000, Talib Kweli, KRS-One, and Gerald Levert. His spoken word interludes were featured on Terence Blanchard’s Choices (which won the Grand Prix in France for the best Jazz Album of the year of 2009), The Cornel West Theory’s Second Rome, Raheem DeVaughn’s Grammy-nominated Love & War: Masterpeace, and most recently on Bootsy Collins’ The Funk Capital of the World. Cornel West has a passion to communicate to a vast variety of publics in order to keep alive the legacy of Martin Luther King, Jr.—a legacy of telling the truth and bearing witness to love and justice.

Dr. West holds a joint appointment in the Department of African and African-American Studies in the Faculty of Arts and Sciences at Howard University.