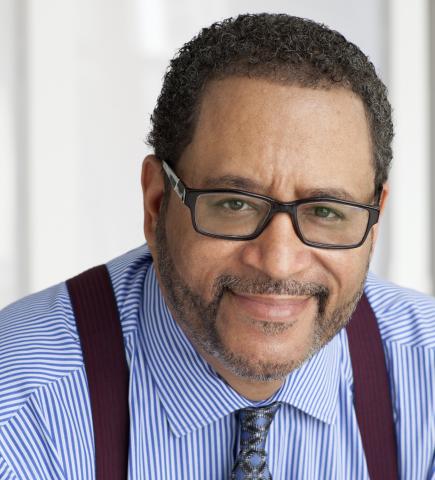 Dr. Michael Eric Dyson—who is an American Book Award recipient and two-time NAACP Image Award winner—is one of the nation’s most influential and renowned public intellectuals. He has been named one of the 150 most powerful African Americans by Ebony magazine. The Philadelphia Weekly contends that Dyson “is reshaping what it means to be a public intellectual by becoming the most visible black academic of his time.”

Dyson was born in 1958 to parents, Everett and Addie Dyson. He attended Cranbrook School in Bloomfield Hills, Michigan on an academic scholarship but left and completed his education at Northwestern High School. He became an ordained Baptist minister at 19 years of age. Having worked in factories in Detroit to support his family, he entered Knoxville College as a freshman at age 21. Dyson received his bachelor's degree from Carson–Newman College (magna cum laude) in 1985, and his Master’s and Doctorate in religion from Princeton University. Dyson serves on the board of directors of the Common Ground Foundation, a project dedicated to empowering urban youth in the United States.

Dyson’s pioneering scholarship has had a profound effect on American ideas. His first book, 1993’s Reflecting Black: African American Cultural Criticism, helped establish the field of black American cultural studies. His next book, 1994’s Making Malcolm: The Myth and Meaning of Malcolm X, was named one of the most important African American books of the 20th century. Dyson’s first book on Martin Luther King, 2000’s I May Not Get There With You: The True Martin Luther King, Jr., made a significant contribution to King scholarship by recovering the radical legacy of the slain civil rights leader. According to book industry Bible Publisher’s Weekly, Dyson’s 2001 book, Holler if You Hear Me: Searching for Tupac Shakur, helped to make books on hip hop commercially viable. His 2006 book, Come Hell or High Water: Hurricane Katrina and the Color of Disaster, was the first major book on Katrina and probed the racial and class fallout from the storm. Dyson’s 2005 New York Times bestseller, Is Bill Cosby Right? Or Has the Black Middle Class Lost Its Mind? helped to jumpstart a national conversation on the black poor that has been called the most important debate in black America since the historic debate between Booker T. Washington and W.E.B. Du Bois. The New York Times bestselling, April 4, 1968: Martin Luther King Jr.’s Death and How It Changed America, has been hailed by the Washington Post as “an excellent sociological primer on institutionalized racism in America.” Dyson has also penned the works The Black Presidency: Barack Obama and the Politics of Race in America and Tears We Cannot Stop: A Sermon to White America.

Dyson’s powerful work has won him legions of admirers and has made him what the Washington Post terms a “superstar professor.” His fearless and fiery oratory led the Chronicle of Higher Education to declare that with his rhetorical gifts he “can rock classroom and chapel alike.” Dyson’s eloquent writing inspired Vanity Fair magazine to describe him as “one of the most graceful and lucid intellectuals writing on race and politics today.”

Dr. Dyson is presently University Professor of Sociology at Georgetown University. His legendary rise—from welfare father to Princeton Ph.D., from church pastor to college professor, from a factory worker who didn’t start college until he was 21 to a figure who has become what writer Naomi Wolf terms “the ideal public intellectual of our time”—may help explain why author Nathan McCall simply calls Dyson “a street fighter in suit and tie. Dyson is proudly married to writer and ordained minister Marcia L. Dyson.