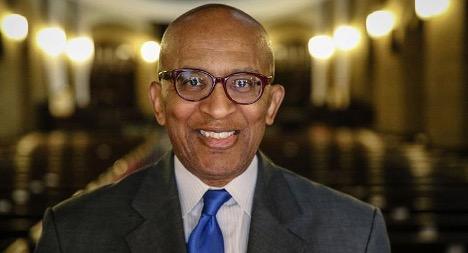 Alvin O’Neal Jackson, born in Laurel, Mississippi and raised in Indianola, Mississippi is the first born of the late Mr. Clyde Cullen Jackson and Mrs. Queen Esther Jackson. He attended Chapman College in Orange, California and graduated with honors from Butler University in Indianapolis, Indiana with a bachelor’s degree in Sociology.

He received his Master of Divinity (M.Div.) degree, also with honors from Duke University, School of Divinity, Durham, North Carolina. In 1991 he completed the course work and was awarded the Doctor of Ministry (D.Min.) degree from the United Theological Seminary in Dayton, Ohio.

He has served as Pastor of Loudon Avenue Christian Church, Roanoke, Va., Associate Pastor, Second Christian Church, Indianapolis, Indiana. For almost 20 years, Dr. Jackson was Senior Pastor of Mississippi Boulevard Christian Church of Memphis, a congregation that experienced phenomenal growth under his leadership. The Church had a participating membership of 350 when he arrived and grew to over 8,000 participating members, making it at the time, the largest and fastest growing Disciple congregation in the United States and Canada.

Dr. Jackson is married to the former Tina Brown of Roanoke, Virginia, and they have one son, Cullen O’Neal Jackson of Memphis. The Jacksons reside in Jacksonville, FL.