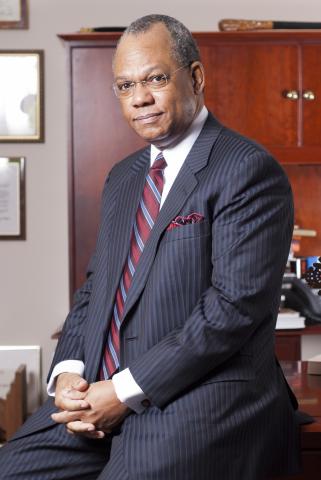 Education and faith are the hallmarks of the ministry of the Reverend Dr. Calvin O. Butts, III, infusing his life, his work and his teachings. As Pastor of the nationally renowned Abyssinian Baptist Church in the City of New York, and President of the State University of New York (SUNY) College at Old Westbury, Dr. Butts’ sincere commitment to enhancing the kingdom of God on earth is evidenced in a loyal attention to the daily activities and services of the congregation, as well as the pervasive impact of the church on community development initiatives including homelessness, senior citizen and youth empowerment, cultural awareness and ecumenical outreach.

A native New Yorker, Dr. Butts spent a few years in the South, where he earned a Bachelor of Arts in Philosophy from Morehouse College in Atlanta, GA. He returned to New York and earned a Master of Divinity in Church History from Union Theological Seminary, and a Doctorate of Ministry in Church and Public Policy from Drew University in Madison, NJ. The Reverend was conferred with honorary degrees from Morehouse; The City College of New York; Tuskegee University in Tuskegee, AL; Claflin College of Orangeburg, SC; Dillard University, New Orleans, LA; Muhlenberg College, Allentown, PA; and Trinity College, Hartford, CT.

Rev. Butts was an Urban Affairs instructor, and served as an Adjunct Professor in the African Studies Department at New York’s City College. He also taught Black Church History at Fordham University, and continues to lecture and speak at colleges, universities and various organizations throughout the United States and abroad.
In addition to his professional and religious avocations, Dr. Butts is a member of the Presidential Advisory Council on HIV/AIDS (PACHA), as well as a Board member of New Visions for Public Schools. He also served as Chairman of the National Black Leadership Commission on AIDS (NBLCA), was a founding member of the organization’s Board of Commissioners and was a member of the Board of Trustees of  American Baptist College in Nashville, TN.

Throughout his tenure at Abyssinian, Dr. Butts has spearheaded numerous boycotts against institutions that practice racist policies and employment discrimination. He has led campaigns to eliminate negative billboard advertising in Central Harlem and other New York City communities, and to expose rap music that includes violent and negative lyrics targeted at women. Rev. Butts has spoken out against racial profiling and police brutality, built coalitions to foster economic development and job growth and mobilized support for the plight of Christian minorities being persecuted abroad. Dr. Butts was also instrumental in establishing a church-administered legal defense fund, which is used to assist members of the Abyssinian congregation and the local community in covering legal expenses.

Rev. Butts is the recipient of numerous honors and awards, including the United Negro College Fund’s (UNCF) Shirley Chisholm Community Service Award; Man of the Year Award from Morehouse College Alumni Association; Morehouse College Candle Award; induction into the Martin Luther King Jr. Board of Preachers (Morehouse College); the William M. Moss Distinguished Brotherhood Award; and the Louise Fisher Morris Humanitarian Award. He is a member of Kappa Alpha Psi Fraternity, Prince Hall Masons (having received the 33rd final degree in Masonry), and was recognized as a Living Treasure by the New York City Chamber of Commerce and Industry.