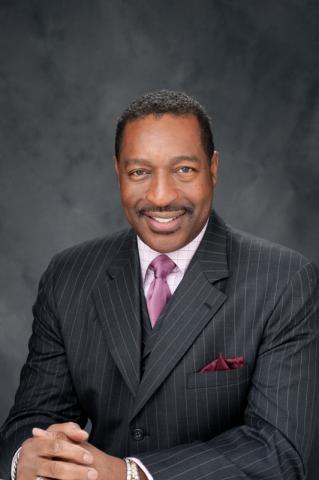 Dr. Kenneth Lee Samuel is a native of Darlington, South Carolina, one of four children born to Mr. & Mrs. Bessie and Albert Samuel, Sr. He has been the recipient of many scholastic and civic honors, including “A Better Chance Scholarship,” which allowed him to attend high school at the prestigious Delbarton School in Morristown, New Jersey. He graduated in 1978 from Wesleyan University in Middletown, Connecticut with a Bachelor of Arts degree in American History. He continued his academic pursuit by matriculating at the Candler School of Theology of Emory University in Atlanta, Georgia, where he received the Benjamin E. Mays Theological Fellowship Award, among others. In 1981, he received his Master of Divinity degree. In 1996, he received the Doctor of Ministry dgree from the United Theological Seminary in Dayton, Ohio. His theological focus is in the field of homiletics and social ethics.

Dr. Samuel was licensed as a Minister of the Gospel on his 23rd birthday, August 5, 1979, at the historic Ebenezer Baptist Church in Atlanta, Georgia, under the pastorate of the Reverend Dr. Joseph L. Roberts, Jr., and Pastor Emeritus, Dr. Martin Luther King, Sr. He was ordained in 1982, also at Ebenezer Baptist Church. In November 2002, Dr. Samuel was granted full ministerial standing in the United Church of Christ through the Georgia/South Carolina Association of the United Church of Christ.

In March of 1987, Dr. Samuel organized the Victory for the World Church, which has dual standing as an Independent Baptist Church and an active congregation of the United Church of Christ. Situated in a growing eastern suburb of Atlanta called Stone Mountain, the Victory Church seeks to address the total needs of the total person through a broad array of ministries and services which promote the spiritual development, educational enhancement, physical fitness and social empowerment of every child of God – regardless of race, gender, culture, class or sexual orientation. In 2001, Dr. Samuel and the Victory Church completed construction on a 3,000 seat worship center, replete with classrooms, offices, library, bookstore, recording studio and a 500 seat banquet hall. In addition, the Kenneth Lee Samuel (KLS) Community Life Center houses a full court gymnasium, additional classrooms, offices and a computer lab.

Dr. Samuel has served as an Adjunct Professor in the Religion and Philosophy Department at Clark Atlanta University. Dr. Samuel’s first book, entitled Solomon’s Success: Four Essential Keys to Leadership has appeared as a number one best seller in The Christian Century magazine.

Believing that our love for Jesus should never be separated from our passion for justice, Dr. Samuel has engaged himself in the struggle for human rights through numerous agencies, which most recently include serving as vice-chair of the African American Leadership Council of People For the American Way (Washington, D.C.), Trustee Board member of the Pacific School of Religion (Berkeley, CA), Advisory Board member of the Interdenominational Theological Center (Atlanta, GA), Board member of Leadership DeKalb (DeKalb County, GA), and Religious Advisory Board member of the National Black Justice Coalition. He is also a past appointed member of the Georgia Council on Adult Literacy, past member of the Citizens Panel Review Board of DeKalb Juvenile Court (CASA), volunteer chaplain of the DeKalb County Jail, past board member of the Scottdale Child Development Center, past southern region chaplain of the Alpha Phi Alpha Fraternity, Inc., past chair of the United Way Ministerial Campaign, and past president of the DeKalb County, Georgia Branch of the NAACP. Additionally, Dr. Samuel has been elected as a Georgia delegate to the last four Democratic National Conventions.