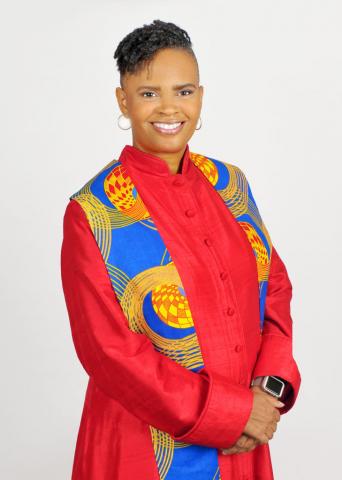 Reverend Dr. Leslie Dawn Callahan, a native of Gary, West Virginia, experienced her first Christian education and formation at Apostolic Temple Church where she developed an enduring love for Jesus Christ and for Christ's body, the Church. Having experienced her call to ministry at an early age, Dr. Callahan began the public proclamation of the gospel at age 19.

Dr. Callahan’s formal education includes the Bachelor of Arts in Religion from Harvard University in Cambridge, Massachusetts and the Master of Divinity from Union Theological Seminary in New York, New York. Following her seminary degree, Dr. Callahan moved to Princeton, New Jersey, where she simultaneously pursued and earned her doctorate in religion at Princeton University and served as the Minister of Christian Education at the First Baptist Church of Princeton. On May 18, 1997, she was ordained to Christian ministry at Judson Memorial Church in New York City.

In the fall of 2002, Dr. Callahan became a member of the faculty of the University of Pennsylvania and became active in the Philadelphia Baptist Association. In April 2005, she was called as the interim pastor of the Salem Baptist Church of Jenkintown. In her two years at Salem, Dr. Callahan’s ministry gifts blossomed further as she preached to, taught, loved, and nurtured the congregation, encouraging them always to expand their capacity for receiving God, God’s presence, and God’s word.

In 2008 she joined the New York Theological Seminary faculty and served as Assistant Professor of Modern Church History and African American Studies. It was during her time there that she also began to pray for a call to a congregation.  The Lord answered that prayer on May 17, 2009, when the St. Paul’s Baptist Church, 1000 Wallace St., Philadelphia, Pennsylvania, took the courageous step and extended a call to her to become the fifth pastor and first woman pastor in what was then their 119-year history.

Dr. Callahan currently serves on the editorial board of The Living Pulpit.  Her published writings include a chapter in The Audacity of Faith: Christian Leaders Reflect on the Election of Barack Obama by Marvin A. McMickle (Editor). She also maintains two blogs.

In addition to her ministry and scholarly pursuits, she enjoys traveling, reading, golf, movies, hanging out with friends, and watching Philadelphia sports teams, especially the Phillies. She is also an active member of the Philadelphia Alumnae Chapter of Delta Sigma Theta Sorority, Inc.

The scripture that provides the theme of her life is Psalm 27:4 “One thing have I desired of the LORD, that will I seek after; that I may dwell in the house of the LORD all the days of my life, to behold the beauty of the LORD, and to enquire in [God’s] temple.