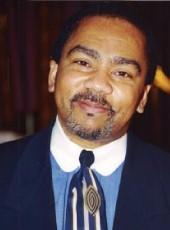 The Reverend Lewis M. Anthony is a native of Washington, DC and a graduate of Anacostia Senior High School as well as Columbia and Harvard universities. As a veteran of civic public affairs, Pastor Anthony began his long involvement in public service and advocacy as a student leader in the movement to convince the Congress of the United States to build a new Shaw Junior High School in the District. He was also a contributor to the first student bill of rights in the D.C. Public Schools. In 1969, following his speech at the dedication of Washington’s Robert F. Kennedy Stadium, he was appointed as the city’s first Youth Representative and Youth Advisor to the Mayor of Washington by the Honorable Walter Edward Washington.

Pastor Anthony is a recipient of numerous awards and citations - including citations from Presidents Lyndon B. Johnson and Richard M. Nixon, the Van Am Prize Medal of Columbia University, the Distinguished Public Service Award of the District of Columbia, the Grassroots Award for Community Service of the Southern Christian Leadership Council, and the National Trio Achievers Award of the National Council of Educational Opportunity Associations. He has also received the “Keys to the City” to Akron, Ohio; Omaha, Nebraska; and Fort Worth, Texas.

Listed in the 1979 edition of Outstanding Young Men in America, he was also chosen as “Minister of the Year” at the 1987 Washington Achievement Awards of Class International and in 1990 was saluted as the “Outstanding Former Title One Student in America” by the National Association of State Coordinators. He was a 1998 recipient of the “Extraordinary Care Award” by the United Way of the District of Columbia, “for opening [his] heart and making life better through. . . extraordinary care.” In August 2001, he was cited with the “Director’s Award” by the Center for Substance Abuse and Treatment and by the National Crime Prevention Council for serving at the Pentagon following the terrorist attacks of September 11th.

On July 22, 1998, Pastor Anthony was privileged to be invited to introduce President William J. Clinton at the White House announcement of the release of millions of dollars of federal grants to support Faith Based Initiatives for prevention of juvenile violence, abuse, and delinquency. He is listed in the 2000-2001 edition of National Register’s Who’s Who in Executives and Professionals and on April 30, 2000, was inducted into the inaugural class of the Washington, DC Hall of Fame, receiving the Legacy Award for Religion.