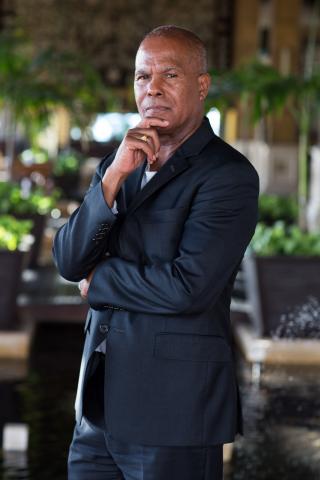 Author, Life Visioning, Spiritual Liberation, The Answer Is You, and Transcendance Expanded

Michael Bernard Beckwith is the founder and spiritual director of the Agape International Spiritual Center. Based in Los Angeles, California, Agape is a trans-denominational, multicultural community of thousands of local, national and international members and live streamers.   Highly regarded for his teachings on the science of inner transformation, Dr. Beckwith embraces a practical approach to spirituality that acknowledges the accelerated pace of our contemporary times.  His unique transmission of spiritual practices including meditation, affirmative prayer, and life visioning enable the practitioner to take the experience of inner peace coupled with awakened awareness into the activities of everyday life.

An eminent representative within diverse religious traditions and harbingers of world peace, in February 2012 Dr. Beckwith addressed the United Nations General Assembly as part of its annual World Interfaith Harmony Week. As co-founder and president of the Association for Global New Thought, he had the distinguished honor of presenting to Nelson Mandela the Gandhi King Award. Along with Arun Gandhi, the grandson of India’s legendary leader, Mahatma Gandhi, Dr. Beckwith is international co-chair of the Gandhi King Season for Nonviolence, which was launched at the United Nations in 1998 and is active in 900 cities across 67 countries.  About its mission, His Holiness the Dalai Lama has said:  “Both Gandhi and Martin Luther King are inspiring examples of the power and truth of nonviolence and the actions that arise from them. The Season for Nonviolence is a very good tool to remind us of their witness, and also the large unfinished work we have together in transforming awareness on our planet.”

Dr. Beckwith is a sought after meditation teacher, conference speaker, and facilitator of the Life Visioning ProcessTM, which he originated.  In 2014 Beckwith addressed the prestigious TED (Technology, Entertainment, and Design) conference. Three of his most recent books—Life Visioning, Spiritual Liberation, and TranscenDance Expanded—are recipients of the prestigious Nautilus Award. He has appeared on SuperSoul Sunday, Dr. Oz, The Oprah Winfrey Show, OWN Help Desk, OWN’s SuperSoul Sessions, Tavis Smiley, Larry King Live, The Oprah Winfrey Show, and in his own PBS Special, The Answer Is You and is a member of Oprah’s prestigious inaugural SuperSoul 100. Oprah.com has named his book, Life Visioning, in the top 15 Books to Solve a Problem. Every Friday at 1 pm PT, thousands tune into his weekly KPFK radio show, Wake Up! The Sound of Transformation.