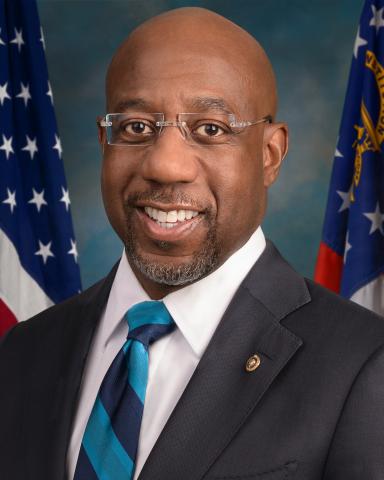 Since 2005, the Reverend Dr. Raphael Gamaliel Warnock has served as the Senior Pastor of the Historic Ebenezer Baptist Church, spiritual home of the Reverend Dr. Martin Luther King, Jr. The son of two Pentecostal pastors, Dr. Warnock responded to the call of ministry at a very early age, and at age 35, became the fifth and the youngest person ever called to the senior pastorate of Ebenezer Baptist Church, founded in 1886. Before coming to EBC, “America’s Freedom Church,” Dr. Warnock was blessed to study and serve within the pastoral ranks of leading congregations also known for their deep spiritual roots and strong public witness. Under Dr. Warnock’s leadership, more than 4,000 new members have joined EBC, enhancing the church’s legacy of social activism with both spiritual and numerical growth.

Dr. Warnock is a graduate of the Leadership Program sponsored by the Greater Baltimore Committee, a graduate of the Summer Leadership Institute of Harvard University, and a graduate of Leadership Atlanta. Dr. Warnock graduated from Morehouse College cum laude in 1991, receiving a Bachelor of Arts degree in psychology. He also holds a Master of Divinity degree from Union Theological Seminary in New York City, from which he graduated with honors and distinctions. Seeing his pastoral work as tied to the ministry of scholarship and the life of the mind, Dr. Warnock continued his graduate studies at Union, receiving a Master of Philosophy degree and a Doctor of Philosophy degree in the field of systematic theology. He is a member of Alpha Phi Alpha Fraternity, Inc., the 100 Black Men of Atlanta, Inc., and a Lifetime Member of the NAACP. Dr. Warnock’s activism was honored in 2016, as his footprints were placed on the International Civil Rights Walk of Fame.

Among other honors, Dr. Warnock has been recognized as one of “Atlanta’s 55 Most Powerful” by Atlanta magazine, one of the “New Kingdom Voices” by Gospel Today magazine, one of “God’s Trombones” by the Rainbow Push Coalition, a “Good Shepherd” by Associated Black Charities, one of the “Chosen Pastors” by The Gospel Choice Awards, “A Man of Influence” by the Atlanta Business League, one of The Root 100 in 2010, 2011, 2012, and 2013 (TheRoot.com a division of the Washington Post), one of the “Top 10 Most Influential Black Ministers” by Loop 21, one of the “20 Top African American Church Leaders” by TheRoot.com, and he has received the Reverend Dr. William A. Jones Justice Award from the National Action Network. He is a National TRIO Achiever Award recipient and has been honored by induction into the Martin Luther King, Jr. Board of Preachers. As an opinion leader, his perspective has been sought out by electronic and print media, locally, nationally, and internationally. His work has been featured on CNN, the CBS Evening News, the Huffington Post, and in the Atlanta Journal and Constitution which hailed him “a leader among Atlanta and national clergy, a fitting heir to the mantle once worn by The Reverend Dr. Martin Luther King, Jr.”

His first book is entitled, The Divided Mind of the Black Church: Theology, Piety & Public Witness (NYU Press, 2014). Dr. Warnock is the proud father of one daughter, Chloé, and one son, Caleb.