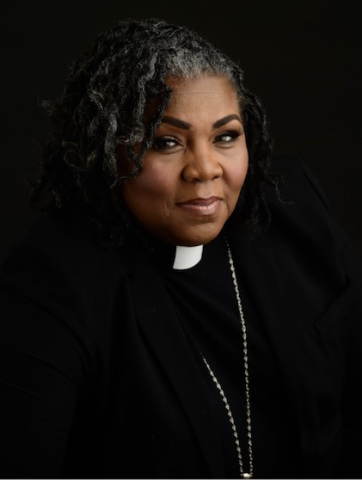 Rev. Traci Blackmon is Associate General Minister of Justice and Local Church Ministries for the United Church of Christ, a denomination inspired by God’s grace to welcome all, love all, and seek justice for all through God-centered action, Christ -driven connection, and Spirit- led leadership. As a public theologian, Rev. Blackmon’s voice is featured on many local, national, and international platforms spanning the breadth of the White House to the Carter Center to the Vatican, as well as several documentaries and print publications. She currently serves as pastor in residence for Eden Theological Seminary in Webster Groves, MO.

From 2009 through 2020, Rev. Blackmon served as pastor of Christ the King United Church of Christ in St. Louis, MO, a position she retired from to serve the wider church fully. The ministries of the church expanded under her leadership as well, serving as a sacred launchpad for communal engagement. After the police killing of Michael Brown, Jr., Christ The King hosted the first community-led town hall meeting and dialogue with law enforcement and elected officials. The church led several other mobilization efforts and healing spaces during the Ferguson uprising.

From 2000 through 2014, she also worked as a registered nurse in the city. Under her healthcare leadership, a community based mobile health unit was established engaging thousands of residents annually and providing a culturally attuned access point to heath care in underserved and uninsured communities.

President Barack Obama appointed Rev. Blackmon to the President's Advisory Council on Faith-Based Neighborhood Partnerships for the White House and awarded her special recognition as a presidential volunteer for her community service. She was also appointed to the Ferguson Commission by Governor Jay Nixon and led the criminal justice reform task force featured in the ‘Forward Through Ferguson: A Path Toward Racial Equity ’Report, calling for sweeping changes in policing, the courts, child well-being and economic mobility in 2015.