Andrew Rankin Memorial Chapel, located on the main campus of Howard University in the nation’s capital, has historically served as a center for cultural and religious activities of the University and the community.

Built during the presidency of Jeremiah Rankin (1890-1903), Andrew Rankin Memorial Chapel was constructed in 1894-95 and was dedicated in 1896. The Chapel was named after Jeremiah Rankin’s brother Andrew, whose widow contributed $5,000 to the building fund.

Over the decades, some of the most renowned and distinguished orators of the world have spoken in the Chapel. As a beacon of non-denominational worship, Andrew Rankin Memorial Chapel has presented a divine challenge to all who have ministered from its pulpit. It was here that Dr. Mordecai Wyatt Johnson, the first African American president of Howard University, thundered his sermons against McCarthyism, racism, ignorance and squalor. This was the rostrum from which Martin Luther King, Jr. prophesied; the educator Benjamin Mays taught; and the historian Charles Wesley interpreted. 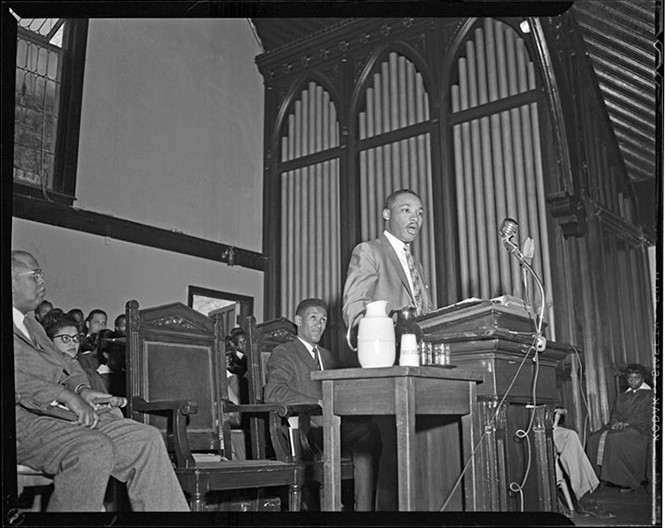 The Chapel has been served by a total of four deans. In 1931, Dr. Howard Thurman was appointed the first Dean of the Chapel. Following the University of Chicago and Princeton, Howard became the third university in the United States to designate a Dean of Chapel. Such an appointment signifies a commitment to organized religious life on campus. Following Dr. Thurman, Dr. Daniel G. Hill, then Dr. Evans Crawford, each served as Dean of the Chapel. Currently, Dr. Bernard L. Richardson serves as Dean. Chaplains from a variety of denominations and ministries, the Friends of Andrew Rankin Memorial Chapel, the Chapel Assistants, the Chapel Ushers, and the Chapel Choir all support the ministry of Rankin Chapel. The Chapel Choir, which is noted for its excellence and inspiring music, is composed of members of the various University choirs, the alumni, and individuals from the wider community.

Designated as a National Historic Landmark, Rankin Chapel is 90 feet long and 50 feet wide, not including the tower. Gothic in style, the Chapel is constructed of red brick trimmed in stone and wood. The main portion of the building is covered with a steep pitched gabled roof made of slate. The Chapel has two floors: the first story was once used as the Howard University Art Gallery and was remodeled in 1948 into a Religious Activities Center, named the Howard Thurman Lounge; the auditorium, on the upper floor, is the sanctuary. Thirty-three stained glass windows adorn the Chapel, each depicting a special dimension of the Howard legacy. Famed artists and University faculty members, James A. Porter and Lois Mailou Jones, designed two sets of windows. Another set of windows, titled “A Century of Worship and Service 1894-1994”, memorializes and commemorates the service of the three former Deans: Howard Thurman, Daniel Hill, and Evans Crawford. This centennial set of windows, designed by Mr. Ron Akili Anderson and dedicated in 1996, was a gift of the Friends of Andrew Rankin Memorial Chapel.

Inside the walls of this venerable building, men and women of all ages and backgrounds have been inspired, enlightened, and comforted. The Chapel has been the setting for mighty preaching, glorious music, and perceptive scholarly discourse; for quiet prayer and heartfelt reflection for marriages, funerals, and other rituals of the human condition. It has served both as a hub of the University’s religious activities and as a vital resource for the wider community. Its reach is not only University-wide, but also national and global.

Most importantly, the Chapel has served as the spiritual haven for the vast number of students who leave the safety of home to enter the different world of college. The Chapel serves to ease the pain of transition and provides a community of worship for the displaced worshipers.

The overarching mission of the Chapel is to aid in the preparation of a new generation of leaders, feeding their spiritual needs for the sake of themselves and humanity at large. Home to students, faculty, staff, and members of the community, Andrew Rankin Memorial Chapel has been and is the spiritual heart of Howard University.